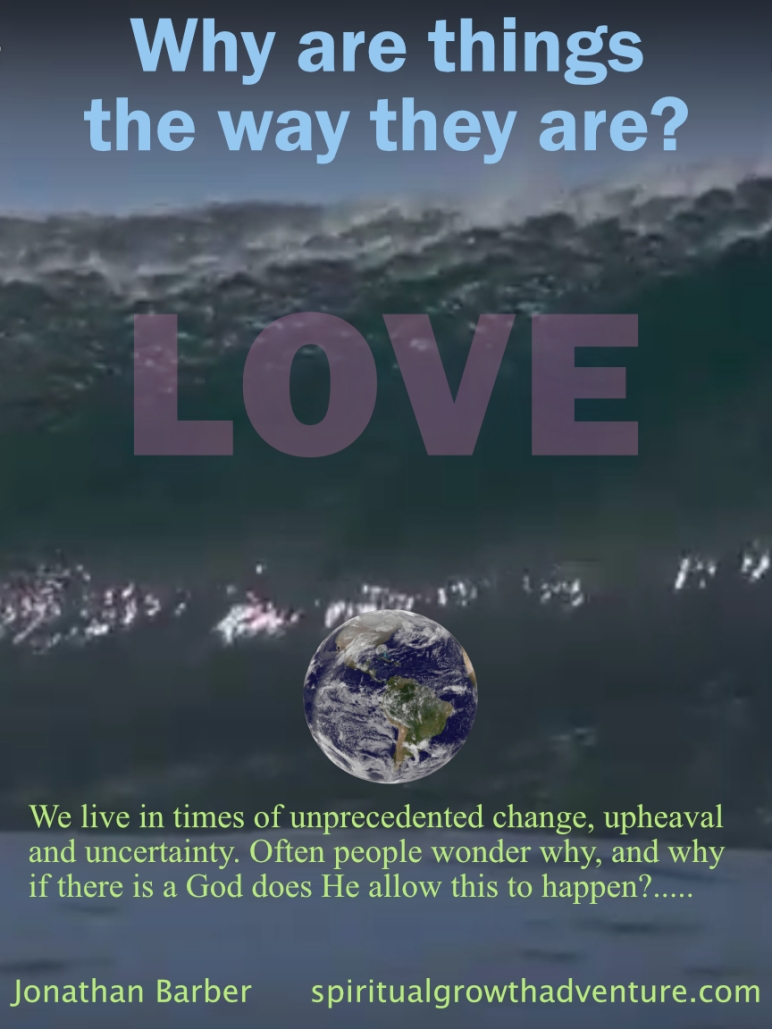 We live in times of unprecedented change, upheaval and uncertainty. Often people wonder why, and why if there is a God does He allow this to happen? Particularly this is the case if there is suffering, death or hardship involved. Why bother to be spiritual if God is like that? For instance, there are enough people who practice some form of spirituality in places like California, Australia and Florida who could try to use the idea that their thoughts create their reality. Yet they still experience fires or floods and lose their homes. So what is going on?

Some spiritual knowledge and understanding helps.

There is some knowledge that either isn’t known or isn’t understood in the West, or even in the East for that matter.

Generalising, a lot of New Age ideas came about in America and then spread around the globe. But modern America didn’t have all the knowledge. The initial immigrants to America came from Britain and Europe. Their spiritual or religious background was Christianity, and modern America was based predominantly on Christianity (though the Founding Fathers as they were called also had spiritual knowledge from their Freemason tradition, but as this was secret, it wasn’t expressed openly). The Native American traditions and knowledge were not taken up by the Europeans.

In Christianity there is no concept of reincarnation. There is no concept of karma. There was nothing about meditation. There was the notion, based on the Bible, about using thoughts through prayer, focus, and affirmation. Out of this spiritual foundation came ideas for the New Age, with some ideas thrown in from people in the hippy culture who had travelled to India and surrounding countries.

The New Age culture had the idea of thoughts determining reality, and a lot of new ideas blossomed about healing, therapies, psychology and relationships that many people have found useful. But important concepts were missing.

There is the concept of a soul, derived initially from the Christian background. But there is more to the soul than what is stated in Christian teachings.

Briefly put, the soul is literally a piece of God. The soul initially experienced itself to be totally connected to God, existing in a place that is Divine Love and Light, that can be called The Beyond or Reality.

A simple description of what happens then is that the soul drops down, and falls asleep as it drops (usually). And it drops into Creation (or the Illusion). It drops to the very bottom of Creation, then starts to have its first lifetime in mineral form, with zero consciousness. In its next lifetime as a different kind of mineral it has an ever-so-small increase in its consciousness. With every next lifetime there is a tiny increase in consciousness, and also later on, awareness. The soul builds up a great experience of Life. It also gets to learn what it is not, as it leaves behind the old form. But it doesn’t know what it is.

When you really look into reincarnation and past lives, you discover that we all have had a huge number of past lives as humans. Going further back there are the many lifetimes in mineral form, plant form and animal form before the human lives.

When the soul reaches the human lives, in some of those lives, the personality the soul has incarnated as, asks questions such as, “Who am I?”, and, “What is the purpose of life?”. There is still some waking up to do, and when it does, the soul and the personality perhaps, get to wake up properly and know themselves, really know themselves as God, as a living experience. (Easy words to write, but to really know it is something else.)

What makes each lifetime different to the one before?

Just by being, even doing nothing, all souls build up karma as they experience each lifetime.

In the lives we have, as well as creating karma, we balance it, use it up, neutralise it. Before each incarnation, on the inner planes we have a discussion with our Higher Selves and perhaps guides and arrange what karma to go through for that life to balance things up. Often as we arrange to incarnate at the same time as other people it literally is that “all the world’s a stage”, and we play roles. In one life someone can be an enemy, in the next a friend, in another they can be brother or sister or mother and so on. In one life we can be very rich and to balance karma in others we can be poor. Its all a balancing act.

The karma, positive or negative, that we experience can come from many lifetimes ago.

To make the picture more complicated or richer depending on your point of view, there is also karma linked to any family and group you are in. There is also karma to do with your village, town or city, and area. Each country has its own karma that affects everyone living in it. Each larger region has its own karma. There is planetary karma, which the whole planet experiences, and also solar system wide karma. There is galactic karma, too (ever seen pictures of two galaxies colliding?), and Universe level karma.

Life is a process where karma gets balanced. In these times, there is a huge amount of Love and Light pouring into the planet Earth and creation. This is to move things on to a more loving and light filled time. But before this can happen, the old karma is being stirred up, and brought to the surface for rapid balancing.

Hence the upheaval and uncertainty. But if you sharpen your intuition and focus on being in your heart, you can navigate these times.

If you are interested in karma, here are some links to other articles on the blog:

How experiences are influenced by karma and the Law of Opposites.

About karma, gender and sexuality

About karma and mental illness

About karma and spiritual path

About karma and relationships

If you would like more on reincarnation, here are some links:

If reincarnation was true, how would you live your life

Notes for a soul coming into creation

In-depth, detailed information about reincarnation and the soul and so much more can be found in the book God Speaks by Meher Baba.

4 thoughts on “Why are things the way they are?”