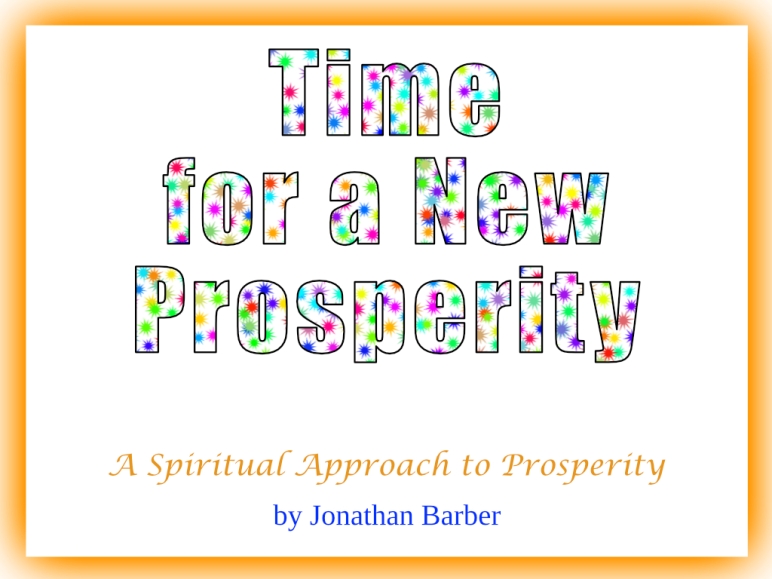 The world has changed a lot over the past several decades, and particularly in the last twenty or so. Right now there is a lot of change happening. There is more to come, as spiritual energy, Love and Light, pour into the Earth and humanity to bring about change. For humanity right now, it is a lot about getting rid of the old, based on old energy, and creating the new, based on new energy. Today, we are in the midst of this change (some people might prefer the word turmoil).

There are people who are invested in the old, and who are trying to hang on to it. For instance, those people who have made a lot of money from oil and the industries based on oil such as plastics will do anything to make sure it keeps going. Think of how slow governments are in dealing with the issue of plastics. This is just one example from many possible ones.

Several decades ago, spiritual prosperity thinking would have been OK with making money running an industry in steel, coal, oil, chemicals and so on, which polluted the planet, and involved dangerous working situations for people, or exploitative ones. The people making the money would have been held up as shining examples of how to be prosperous. That was the old prosperity, the old way. Some people still want to live this way.

There are other possible examples, such as cryptocurrency mining which uses up huge amounts of electricity to produce and so uses up the earth’s resources and contributes to global warming.

These are all ways this world currently goes on. Ways that are not exactly based on Love and Light. They can touch people we know personally. They certainly touch our communities and societies. Does making money through these ways mean it is being done prosperously?

Turmoil and change is making humanity (well some of them) learn from the state of the world and the consequences of past actions. These caring people think there has to be something better than the old ways.

On a spiritual level, the insights and new creative concepts have already been flowing in. There are many people at the leading edge bringing in new technologies, developing sustainable ways of doing things, and having ideas about how to live more intelligently. It’s a time of creativity and experimentation.

As is often the case in spiritual matters, spiritual energy comes in to create situations in life for individuals and groups of individuals that they then go through and learn from. Life itself is the teacher, and people come to realise what is important and what isn’t, and use their ingenuity to find solutions to problems. With the spiritual input, life changes, and people change because of it. (Who did you think was in charge of Life, the Universe and Everything?)

For those people who want to do things in a new way, they can access new insights and ideas that are already flowing in. People can just be open to them, or they can go a spiritual route and deliberately work with the Divine (the Father aspect or the Mother aspect; both work), and embrace the new spiritual ideas of Prosperity coming in. It’s like tapping into a wave that is flowing in from our new, improved future, which is very different to the old one that we are leaving behind. The book “A Spiritual Approach to Prosperity” is all about this.

In the past, the old spiritual approach to prosperity was heavily focused on money and wealth and having lots of it.

The new spiritual approach to prosperity does include money as it is still useful as a means of exchange of energy. But in life, we have learnt that having clean air and clean water massively adds to quality of life. So does nutritious food, which given pollution, turbulent weather, increasing population and the quality of food produced by factory farming, is becoming an issue. We have learnt that being able to spend time with other people is important, simply being able to be held and hugged is important. Having privacy is becoming important as the tech companies collect and sell data about us, without respect for people. Having an environment where we can access some greenery or Nature is important for people. Having employment, as setting up and running businesses is not for everyone, without exploitation but rather with respect is important.

The very nature of how money is used will need to change. Currently, people go into banking and finance because they want to make lots of money. The financial system is set up to run so that money comes from the customers, and the money flows to those who work in Finance so they can become rich off these customers. There is plenty of scope for innovative thinkers here.

A spiritual approach to prosperity has always relied on some understanding of how focused thought works with spiritual energy. The roles of visualisation and intuition still applies, as does timely right action. What is different now and in earlier times when prosperity books were written is that there are many more people around who have an awareness of spirituality and the world, and who visualize and meditate. What else is very different is the phenomenal spiritual energy flowing in from the Divine for people to access and work with to be prosperous, and bring in the new.

To buy the book “A Spiritual Approach to Prosperity” follow the link amazon.com/author/barberjonathan. There are also more articles and a meditation on prosperity:

A meditation for you to try; A Golden Glow for Prosperity

3 thoughts on “Time for a new prosperity”